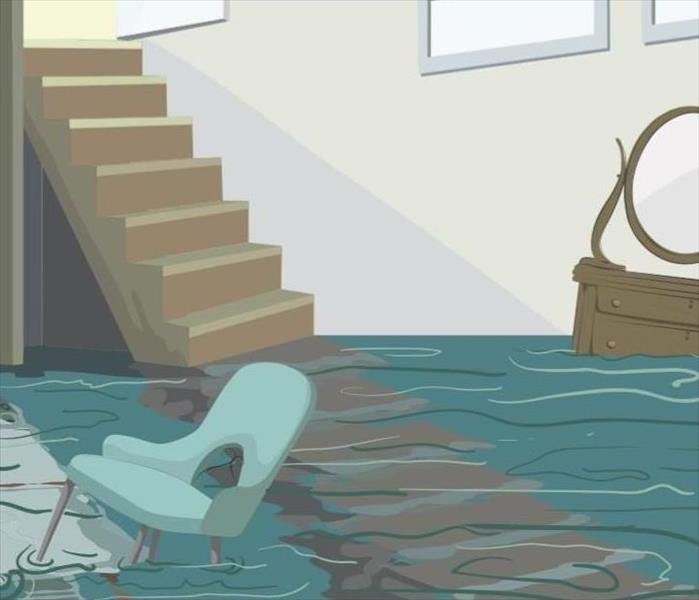 Flooding after a storm can be devastating. SERVPRO has the tools and personnel to handle drying out your property after damage. Call today.

When major storms hit, they usually hit large areas at once. One SERVPRO franchise may suddenly be flooded with dozens of calls in the span of a few hours, and from an outside perspective, it can be difficult to understand how we can service such large numbers of flood damage victims in New Milford and surrounding areas at once. Our secret is our national presence: there are over 1,700 SERVPRO franchises nationwide, a number that grows every year. Interconnectedness with other regions and facilities lets us acquire extra personnel and equipment when we need it most, and allows us to service more homeowners at once.

Hurricanes are some of the most common scenarios in which we mobilize extra teams to combat flood damage in New Milford. The entire east coast of the United States remains vulnerable to hurricanes, as seen in 2012 when hurricane Sandy caused immense damage on the northern coast. When that storm hit, SERVPRO locations across the region mobilized to help areas closer to the coast to rebuild and restore their homes.

However, Sandy is not the most recent storm to warrant such a large-scale response in the region. In 2014, the infamous Polar Vortex struck, causing catastrophic snow and flood damage across multiple states. Once again, SERVPRO franchises from all around the region helped locals to protect their properties as much as possible, saving combined millions thanks to fast and efficient mitigation efforts. Moreover, then, in 2017, hurricanes Harvey and Irma made landfall in Texas and Florida, respectively, costing hundreds of billions of dollars in combined damage. SERVPRO teams from around the country lent resources and equipment to the affected regions, and continue to assist in efforts to reverse damages and effects from these destructive storms.

SERVPRO of Teaneck / Englewood is a local franchise of a national company with the resources, personnel, and connections to make sure your home recovers from flood damage as smoothly as possible. Call us at (201) 266-0482.